The Majestic SLT241 24” 12V LED TV is packed with new technology such as Android 9.0 Smart Functions, Optical Audio Output, PVR, Smart Remote that has keyboard and Mouse Pointer Technology, Bluetooth 4.2, Screen Mirroring from Tablet or Phone to the TV wirelessly 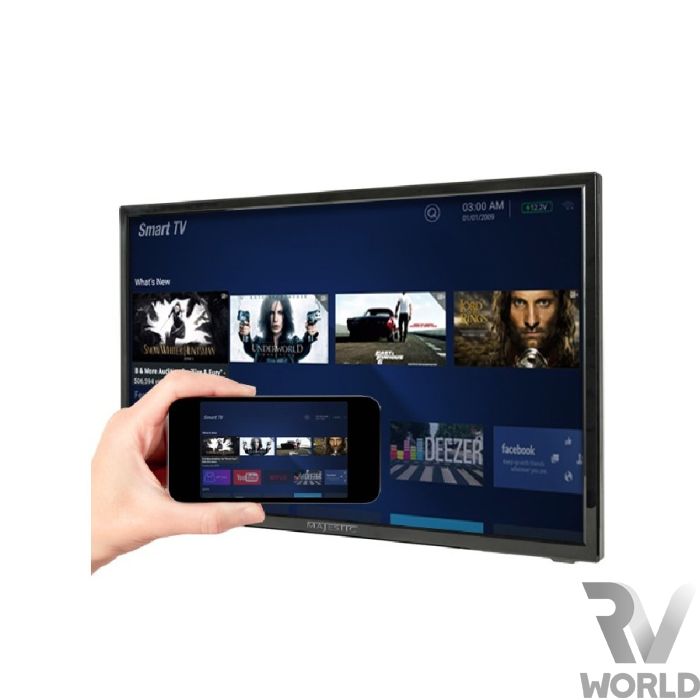 Skip to the beginning of the images gallery
Description

The New Majestic SLT241 24” 12 Volt LED TV has set a new standard in 12V LED TV technology by adding state of the art Smart TV technology. The Majestic SLT241 24” 12V LED TV is packed with new technology such as Android 9.0 Smart Functions, Optical Audio Output,Personal Video Recorder, Smart Remote that has keyboard and Mouse Pointer Technology, Bluetooth 4.2, Screen Mirroring from Tablet or Phone to the TV wirelessly, ARC, 2x USB for Multi Media and a high brightness LED Panel with Full HD video resolution. Plus it has a built in Satellite TV Tuner for those countries with DVB-S2 compatibility.

Most TV brands claim they are 12 Volt, and technically yes they work on 12 Volts. However the issue is the level of tolerance the TV has, most 12 Volt TVs have a limited tolerance, generally between 11V and 14V. This can cause many people problems especially when they have long cable runs, or the battery voltage drops a little (especially late at night), or even if they have a poor power connection. The Majestic TV’s are designed to work from 9.5V through to 30V DC, therefore ensuring you will not have any power issues
The Majestic SLT241 24” 12V LED TV has built-in Android 9.0 Smart functionality. This allows you full smart functions so that you can download various Apps to give you the customisation of the Apps you want to use. Combined with a Keyboard and Mouse Pointer Remote control gives you the ease of use for simple access to websites, games, and Apps.
As part of being a Smart TV and using the WiFi technology, Majestic has increased the power of the WiFi to give the TV the best chance of picking up the weakest signal and being able to give you the optimum performance. This gives you confidence when in a Caravan Park or Marina that you have the best chance of getting WiFi capabilities. However, for those in areas whereby there is no WiFi you can simply connect the TV to your Sim Powered Phone or Tablet and use your data plan to stream through into the TV.
The Majestic SLT241 24” 12 Volt LED TV has 2x USBs that are designed to take most of your Multi Media files and display these on the screen. So if you have a hard drive or USB stick with photos, you can select the folder and with you, photos, and then the TV will go through them like a slide show. If you have movies or music simply select what you want to watch or listen to and the TV will display these. The second USB port can be used for the dongle which matches the Keyboard Remote control.
Majestic has been leading the technology to allow phones and tablets to be interfaced to the Majestic range of TVs using the MMMI technology for many years. With the latest technology in WiFi Chipsets Majestic has now enabled a direct WiFi streaming of your screen from your Android or iOS device. This acts like a mirror cast function whereby you connect the mobile device being a phone or tablet to the TV via direct WiFi and stream the screen onto the TV. This is not done via Bluetooth, but through direct link WiFi therefore not needing other WiFi devices in the boat or RV to ensure the best and most stable possible connection.
Using the latest technology in Bluetooth, Majestic has installed Bluetooth 4.2 for enhancing privacy and superior speed. This technology is lower power with significantly higher speed and increased stability in data transfers. For those customers who want to get the best out of their audio system, you can stream via Bluetooth audio to the TV and then use the optical audio output into Fusion or other optical audio input compatible devices. The Bluetooth 4.2 is bi-directional so you can send Bluetooth to the TV such as music from your phone to the TV and from the TV to a set of Bluetooth speakers or stereo system.
The Majestic SLT241 24" LED TV has been designed to give you as many options to enjoy your media as possible, from streaming from your phone or tablet wirelessly to the TV all the way through to connecting your USB device to the TV. The Majestic TV offers two USB ports. Most people will use one USB for the Smart Keyboard and Laser Pointer Remote Control and the other port for USB Multi-Media. The Multi-Media port will allow you to play Movies, Music and display photos, the music played through the TV can be sent via Bluetooth to other devices such a Bluetooth-compatible stereo, or Bluetooth Speakers giving you the freedom to configure the system how you want.

The physical design of the Majestic SLT241 24” 12V LED TV is to be able to withstand the harsh Outback and tough Marine environment. Weighing only 3.7Kg allows this TV to be mounted in almost any location without stressing the surface and with a 100x100mm Vesa hole spacing, this TV can be mounted in various different locations using any mounting bracket that has 100x100 Vesa mounting. The TV can be installed almost anywhere and with the wide viewing angles, you will always see the perfect picture.

ARC: Audio Return Channel is a new feature that has been added to the Majestic TV which allows you to send the audio through the HDMI cable to another ARC-compatible device. This is an excellent feature when integrated into audio devices such as Fusion Stereos, Bose Audio systems, and many others. This allows Dolby Digital Audio to be sent via the HDMI Cable to give you a sharp crisp sound, instead of using a two-wire system with a dedicated Audio Cable.

Optical Audio Output: With technology advancing and the quality of sound improving through the digital speed of transmission, Majestic has added Optical Audio Output to the SLT241 LED TV. This is designed to work with brands such as Fusion to ensure the ultimate sound is delivered from the TV to the Audio system and giving you the best possible experience in your entertainment system.

TV Reception: One important factor in being able to receive a TV signal is the TV Tuner. Most companies do not invest the time or money to enhance the TV tuner because in most cases the TV tuner is connected to a cable system with a strong signal level. However, in boats and RV's Digital TV reception is all they have access to (unless they have satellite installed). The team of engineers at Majestic has been working to ensure that the TV tuner is of the highest possible gain using the latest in SMT technology. This ensures that the weakest signal is still amplified to give you the best possible signal reception in those distance and difficult areas. Now when matched with the Majestic UFO X TV antenna which has the highest gain at 30dB for its tiny 9" size, you can be assured that if there is any chance of signal reception, you will be the one that can get it.

In addition to a Digital TV tuner, this TV also has a built in Satellite TV Tuner for those countries with DVB-S2 compatibility.

* We reserve the right to revise the free delivery offer on some bulky items (for example, a large fridge travelling to Te Anau). In this case, we will endeavor to offer a subsidized freight cost. If the delivery address is outside the North and South Islands (eg. Waiheke, Great Barrier, Stewart Islands), please contact us for a freight quote.

DELIVERY TIMES are estimates only and may be extended by factors outside our control.

Related Products
Check items to add to the cart or